The Mystery of an Error and a New Discovery 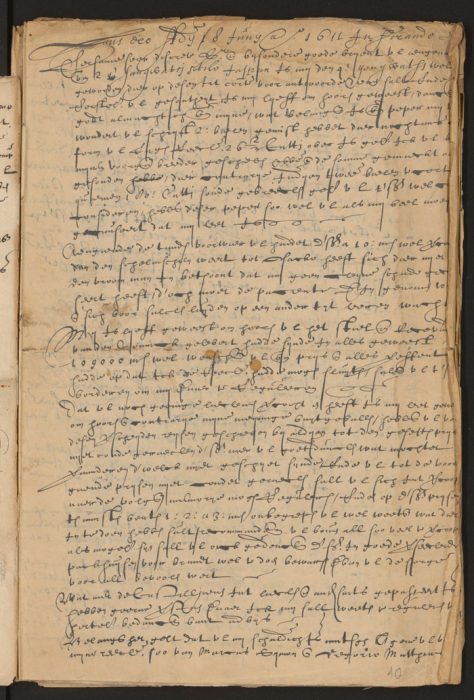 Letter from the head of the Dutch Factory in Hirado, Jacques Specx to William Adams, Hirado, June 8, 1611.

The letter does not specify the addressee. Reading on, it became clear that the letter was a reply to a letter sent by the addressee, dated March 29 in the Japanese calendar. The content of the letter concerns commodity transactions and information about the domestic political situation. Particularly worthy of note is the description that the addressee delivered a sizeable amount of steel and iron sand to “the king.” Normally in Dutch documents, “the king” refers to Tokugawa Hidetada, but in this case, the context suggests that the recipient of the steel might be Tokugawa Ieyasu.

In addition, the letter contains a reference to a sword presented by Ieyasu to Specx after Specx’s audience with Ieyasu in Sunpu. According to the letter, the addressee received the sword from Ieyasu, and had it in his care. However, Specx’s audience took place on August 17, 1611, two months later than the date of the letter. Accordingly, the two dates do not match. Examining the contents of the letter and comparing it with the contents of another letter that Specx sent to his assistant Matthias on June 8, 1612, I found that the letter should actually be dated to June 8, 1612, and that four of his letters, including the one in question, were addressed to William Adams (Miura Anjin), an Englishman who was a close advisor of Ieyasu.

Adams acted as an intermediary when Specx had his audience with Ieyasu in 1611. The identification of the addressee also reveals that it was Adams who took care of Specx's sword.

Specx’s writing error occurred in the year 1612. This coincided with the time when he was extremely busy trying to get the Hirado Dutch trading post off the ground. As is often the case, when there is no time to spare, errors creep in.