The 26th Nichibunken Overseas Symposium: “On the Heritage of Postcolonial Studies: Translation of the Untranslatable”

Over three days, February 13–15, 2020, the symposium: “On the Heritage of Postcolonial Studies: Translation of the Untranslatable” was held at the Cornell Faculty Club in New York City. This event was held to celebrate the 60th wedding anniversary of Talal Asad, Professor Emeritus of the Graduate Center of City University of New York and the 30th anniversary of Nichibunken. Taking inspiration from Asad’s 2018 book, Secular Translations: Nation-State, Modern Self, and Calculative Reason (Columbia University Press), the symposium was planned as an overview of postcolonial studies from the viewpoint of translation theory. 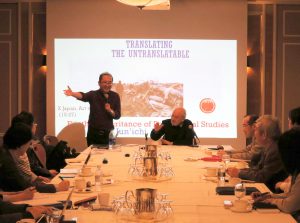 Jointly funded by Nichibunken, the Institute of Japanese Studies at Hallym University (Chuncheon, Republic of Korea), and Cornell University, the symposium was organized by Nichibunken’s Office of International Research Exchange led by Assistant Professor Matsugi Hiromi. The speakers were, in addition to Professor Asad and myself; from the United States, Professor Gayatri Spivak of Columbia University, Professor Hent de Vries of NYU, Professor Naoki Sakai of Cornell University, and Associate Professor Hirano Katsuya of University of California, Los Angeles; from Germany, Professor Marion Eggert of Ruhr-Universität Bochum; and from the Republic of Korea, Professor Suh Johng wan of Hallym University. We regret that Professor Wang Hui of Tsinghua University from China was not able to attend due to U.S. border restrictions put in place in response to the coronavirus pandemic. 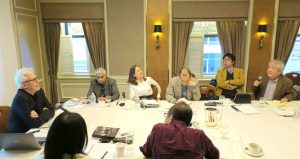 The topic for discussion was readings of the theme “translation of the untranslatable” as a process of subjectification. Lively debate unfolded over how to connect the now-classic works The Task of the Translator by Walter Benjamin and Des Tours de Babel by Jacques Derrida with speakers Naoki Sakai’s Translation and Subjectivity and Asad’s Secular Translations, as well as over the relationship between the untranslatable and the necessity to translate. The three days turned into a space where intellectuals from South Asia, East Asia, and elsewhere explored the traditions of Western knowledge and re-read them through their own subjectivity demonstrated in the practice of translation. It seems to me that concealed therein is the key to unlocking the genuinely international development of the Consortium for Global Japanese Studies.